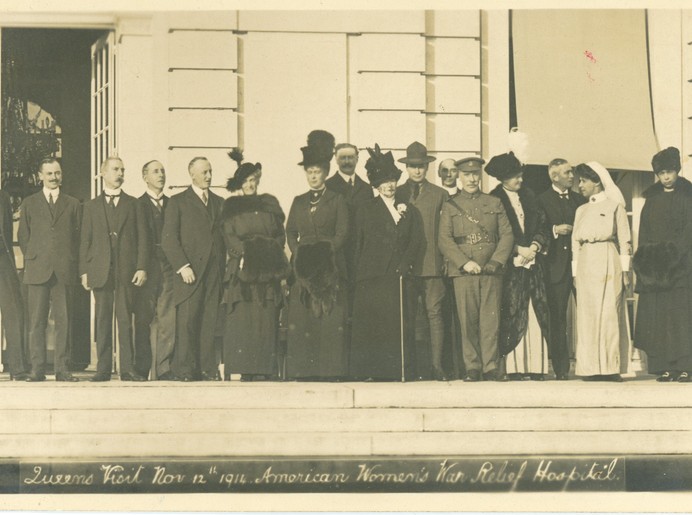 The Queen and the Wounded Soldiers

Paignton was honoured by the presence of Royalty on Thursday, when Her Majesty Queen Mary made a brief visit to the town for the purpose of inspecting the wounded British soldiers at the American Women’s Red Cross Hospital, at Oldway, Paignton, the palatial residence of Mr. Paris E. Singer.

The hospital was organised by the American Women’s War Committee, including Lady Paget, Mrs. John Aster, the Duchess of Marlborough, Lady Randolph Churchill, Lady Henry, Lady Lowther and Mrs. Lulu Harcourt. Since the outbreak of hostilities several hundred wounded British soldiers have received treatment at the institution. It is in every aspect an ideal one, everything being provided that the soldiers can require. One of the features is the operating theatre, which for its size, is regarded as one of the best equipped in the world.

The Queen’s visit was intended to be purely a private one, but the visit created tremendous interest in the district, and thousands of people assembled and gave Her Majesty an enthusiastic and loyal welcome.

The Royal train, which consisted of five coaches, drawn by the engine “Princess Mary,” and bearing the Royal Arms, arrived at the station punctual to the scheduled time - 1.55 - amid a scene of great enthusiasm. Her Majesty was attended by Countess Fortescue, Lady-in-Waiting; Lady Arthur Paget, president of the Executive Committee of the hospital; Mrs. Harcourt, one of the hon. Secretaries; and Sir Charles Cust, equerry, was received on the platform by Mr. and Mrs. Paris Singer: Dr. Beale, principal medical officer of the hospital: and Lieut. Colonel R.C. Gunning, colonel-commandant. Amongst those also present on the platform were the Misses Singer, Mrs. Gunning and Miss Gunning, and the wives of the medical staff, Mesdames Lawrence, Bennett,Adams, Frampton, Stubbs and Carver, Mrs. Fuller, vicar’s wife and Dr. Muriel Morris of the Red Cross Hospital.

The 4th Paignton Troop of Boy Scouts, under Scoutmaster Wallace, who rendered valuable help in connection with the Hospital, were given the honour of acting as Her Majesty’s guard of honour at the Hospital. Supt. L.R. Crew, and ambulance officer J. Martin, who represented the City of Bristol Ambulance Section, who were responsible for the transport, were also there.

Tour of the Wards

The Hospital was flying the British and American Red Cross flags. The Queen was received by Dr. Beale and the matron Miss Gertrude Fletcher. Mr. J.H. Cooper and members of the medical and nursing staff, including Drs. Leonard and Fitzsimons, W.W. Stabb, W.N. Steele, A.E. Carver, Lawrence Bennett and M.T. Frampton, were also present.

Her Majesty who was in Court mourning, was wearing a smart black coat and skirt with beautiful black furs and black velvet hat with handsome feather mount, which well set off her mass of fair hair. She also wore a collar of pearls. Accompanied by Countess Fortesue by Lady Paget, Mrs. Harcourt, Sir Charles Cust, Mr. and Mrs. Paris Singer, Lieut.-Col. R.C. Gunning (commandant), Dr. Beale (senior surgeon) Miss Gertrude Fletcher (matron) and the Rev. A.R. Fuller (vicar of Paignton), she passed through the fine entrance hall in marble mosaic (a replica of that at Versailles destroyed during the revolution with its wonderful picture by David depicting the crowning of Josephine, painted at the command of Napoleon) and starting with the Paget ward, she visited all 13 wards. She had words of comfort and encouragement for every soldier, more especially for the men in cots. In one case she was very much amused at a man who, shortly after her visit to India after the Coronation, had tattooed on one arm a portrait of the King and on the other herself, and she stopped and laughed over it. In another ward one of the soldiers, who is quite an expert in the making of paper flowers, gave her some white and gold flowers, which she tucked in her belt and carried with her. In other cases the men showed Her Majesty bullets and pieces of shrapnel, which had been extricated from their wounds.

A photograph was taken of Her Majesty with Mr. and Mrs. Paris Singer, the medical and nursing staff, and Mr. Cooper, on the south terrace, before she passed to the operating theatre, and spent some time in the Munsey ward, which used to be the great banqueting hall.

Before leaving, the Queen expressed her admiration of the hospital and its equipment and also of the beautiful and extensive grounds, and thanked Mr. and Mrs. Singer. She also referred in gratifying terms to the excellence of the treatment given in the hospital in which there were 158 patients and said how pleased she was with all the arrangements made for their comfort. Her Majesty, it may also be mentioned, had brought with her bales of clothes for the patients to wear when leaving the hospital.


The Queen returned to the station with Lady Paget in an open motor-car. By this time the crowd had reached enormous proportions, and on the way to the station Her Majesty was most enthusiastically cheered and bowed graciously in reply.